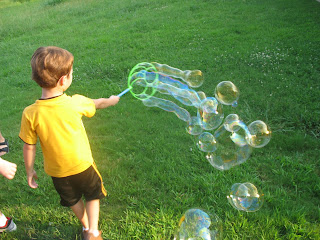 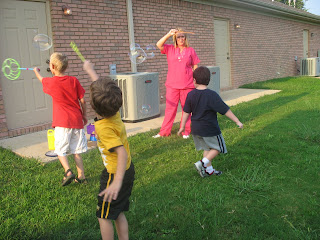 Today I slept in until past noon, quickly got ready and headed to clinic…thought I had a kid at 1:30pm at clinic…

Got a strained phone call at 1:35pmish asking me to come to a home visit that my OT was on…which is luckily around the corner from clinic…she had just gotten a phone call from the new OT they had hired, who decided she was too tired to come in today, on her first day of work (to the new clinic)!! NOT a good sign!!!!!!!! So she was frantically trying to figure out how to adjust schedule and was really disoriented and since it turned out I didn't have any kids scheduled until 3:30pm, it was okay for me to come do the home visit…she did her phone calls and supervised…so I swooped in and worked with the kid…we did shaving cream on a dry erase board which he loved but his mom has serious sensory issues and was like AUGH! LOL. Then he and I went outside for like 20 minutes (remember this is Southern heat, in August, so it was muggy and hot) and we ran around doing FREEZES…it was fun but I was like augh there goes the makeup I just put on. LOL.

Went back and my next kid was a 7 year old girl I hadn't worked with before…printed out her goals and they included frustration reduction, increasing self-esteem, and increasing body schematics…apparently at time of eval she couldn't do jumping jacks etc.
Honestly some of our hardest kids are our easiest kids – the ones who function pretty normally – it's hard to figure out to do with such smart kids! A lot easier when the child needs to work on EVERYTHING. 🙂

Well we broke up the session into two parts – first half we did painting – we did a painting of things that made her happy and she picked her mom as someone who makes her smile and laugh. 🙂 Also her dad and a cat. I showed her Lester the Lion Kitty and her comment was “he looks like someone who has been tortured”. LOL

She did NOT add her cousin (in the waiting room) to her list of things that make her happy because “we fight a lot” LOL. …then we worked on a more abstract painting – based on a list of  things she likes about herself…she needed a little assistance but overall did great…and we did just happy stuff of wiggles and wobbles and lines and dots and stuff like that for that painting…then I wrote in the items on her list once she was done painting. She was going to put it on her bedroom door and I told her she could add stuff in as she thinks of more stuff she likes about herself. She was SO sweet and calm and cute.

THEN we did an obstacle course through a tunnel, over a heavy bolster, on the trampoline, etc…and it turns out she could do jumping jacks just fine now….she started gymnastics recently and it's helped a lot…so…not sure what happens in cases like that where the goals are met asap…maybe time to discharge her already. (She was evaluated quite a while ago but because of Medicaid approvals etc it's often over a month before we can actually start seeing the kid)

THEN I saw a little girl with Down syndrome who is very mischievous and defiant most of the time…we started with the obstacle course I had set up earlier to get in some gross motor heavy work, then we worked on a tabletop activity of tracing her name, but I had her sit on a red wobble disk, and we turned off the lights and put on the fish machine, and played some music….she was a lot calmer with all this input and didn't once try to run out to her mom (her typical MO involves us fighting in the hallways), and we cut out stuff using manila envelopes instead of normal paper since it's thicker and therefore much easier to cut…we did some finger painting…and then she played with Bubba Bear….she was laughing hysterically at him, the most I've ever seen her laugh. I like that the bear will say things like “Are you doing anything important? And the kid is always like “yeah”. She was actually quite calm for once and I liked hearing her laugh so much.

THEN I saw my child with low frustration tolerance and problems with self-expression, the one who can't tolerate toothpaste….he spent the first 15 minutes or so with me and a giant blue bolster, hitting it and kicking it from the trampoline, he was like “I got these moves from Kung Fu Panda”…

I'd let it fall over so that he'd have to pull it back up…lots of great heavy work for a sensory kid…then I pulled out the shaving cream to use on the mirror in that same room…he grimaced and wasn't thrilled, but he helped me smear it all over the mirror…then got into it and made a snail and SpongeBob with his fingers…..pretty big deal he touched it…and lucky him, we ended up going out to do bubbles with the COTA's kid and speech therapist's kid…with our bubble machine…and unfortunately the bubble machine was having a rough day so we pulled out normal bubbles…I took lots of pictures…and we were out there a long time because it was 3 kids who all need a lot of work on social skills…so it was great to have to practice taking turns etc. I am including a few that don't show the kids faces.

Overall today all my kids were more well-behaved and calmer than normal…I felt pretty good about our sessions, that the kids had gotten what they needed out of it, some sensory input etc.

Oh – most bizarre/funniest/neatest part of day – right at the end of day, the clinic director's mom hobbled in on a cane and sat down with us around 630pm as I was about to leave – and I grabbed my foam fencing swords and her eyes lit up – she stood up without her cane, took a sword from me, and started fencing me!! I was like whoah lady! Awesome! LOL! She was walking back and forth in fencing pose…the clinic director tried to introduce me to her step-dad and of course as I was distracted she poked me in the chest! It was one of those perfect “meaningful activity” things – I'm sure if I were like, yo, get up and walk without your cane, she'd have been like NOOOOOOOOOOOOO…but she saw the fencing swords and hopped up because it was symbolic of a meaningful past occupation.  Blah blah blah. mOTivation.

Maybe I'll bring my foam swords on my next rotation, a rehab hospital, too! 🙂

PS: I'm so excited Lester the Lion Kitty (a bunch of new videos up on his blog) made it onto UglyOverload!!     At UglyOverload, Lester joins the ranks of freakish spiders and fractal octopi, so it's quite an honor. 🙂