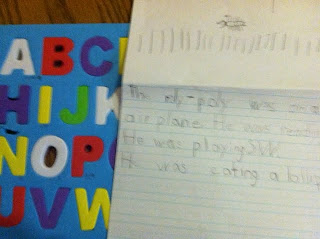 So today we were using Story Cubes (post to follow on what that is) to write a story. The little boy (whose work has gone from COMPLETELY illegible to the beautiful writing you see here, in first grade), I’ll call him Lyle so the rest of the story makes sense. Ignore the horrific construction of that last sentence. Anyway. He did an absolutely beautiful “p” and I was like ooh, that “p” gets a gold star, wow, amazing. So I put a tiny pencil mark next to the the P on that alphabet puzzle you see (it was a dollar).  That was all I planned to do, but then he thought that was a new game more or less. So for each letter he did, he tried to do perfectly, so that he could get a mark next to another letter. So he’d do a letter, examine it for perfection, fix it if it wasn’t, then make a mark next to it on the puzzle. It became a game where he wanted “L” to win since it’s the first letter of his name. So I suggested the word lollipop, lol. I don’t know if you can see the dots next to the letters, make the picture big to see. But I think I’ll try erasing those dots and playing that game again with him or other kids to work on perfect letters….and/or will laminate the alphabet to use a dry erase marker next time, or who knows. Pretty fun! Such lovely handwriting! My mom’s friend who is visiting said “That’s nicer handwriting than what my high schoolers produce.” 🙂

Oh. And my pencil didn’t have an eraser and his did, and I would sometimes make a mistake (I was on another piece of paper) and pretend-weep and be like “I don’t have the force”….because he is a Star Wars kid so we call the eraser “the force” that saves the letters. So he was like what!! you don’t have the force!! and would then use “his force” to help me out. ahahaha. Remember that if you have kids who don’t erase and tend to just write over it, it may be because erasing is not an easy skill for them…check out their eraser skills…..