Ding dong, the week is dead… 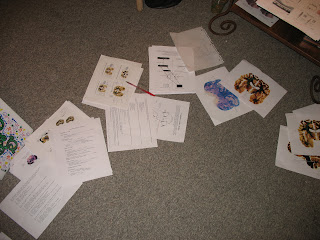 This has been the worst week of OT school so far, in terms of academic workload. Or maybe I have anatomy amnesia and don’t remember how stressed I was during that class. This at least SEEMS like the worst it’s been. Anyway, several nights this week have been such that I could only get in 4-5 hours of sleep, but I function best at 8 hours so I’ve been awfully tired! I was working on a bunch of stuff that was due, but neurobiology was hovering over my head. Normally, I’m the type of student that sits in the front row, pays attention, takes copious notes, and studies. For whatever reason, I wasn’t that way in neurobiology, and goofed off alot. I knew as I went to each class that I had no idea what was going on and didn’t understand, but for some reason decided that was okay and that I didn’t need to study. Until this week. Because it was time for our neuro final, worth 50% of our grade. And I started to freak out, because I had so many other things going on. So I studied a little bit Tuesday and Wednesday, when I found time. Thursday, several girls came over around 1pm to study for neuro, and it ended up turning into a 12 hour affair. They left around 1am. While we did go off on tangents and take a dinner break, it was essentially 12 hours of marathon neuro studying. It was actually kinda fun. The material really ended up making more sense. Of course by the end of it as it was getting really late we started getting giddy and everything seemed funny. LATERAL GENICULATE NUCLEUS! HA HA HA!!! Hmm. Anyway, I think we all ended up doing a good job on the final and I am reasonably confident I got an A in the course, so I am thrilled. I wish I had been a better student in his class though. The problem with cramming is that you learn it for the test and then forget it. So on the one hand, it’s unlikely I’ll ever need to know detailed information in the clinic about “the magnocellular neurosecretory system”. On the other hand, if someone comes in with a cut or compressed peripheral nerve, it would be nice to have remembered some of my neuro off the top of my head so I can spend less time looking up symptoms.

Anyway…the week is over. WOO! One more month until summer break!

Update: I did get an A in the course, and the professor was a very nice, knowledgeable man. It was just that our learning styles didn’t mesh.

Any of you have a grad school horror story you want to share?