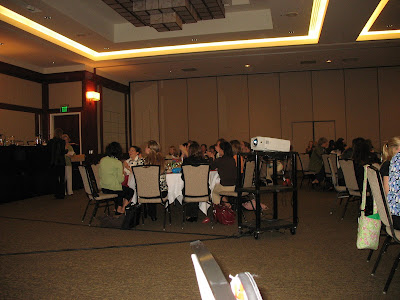 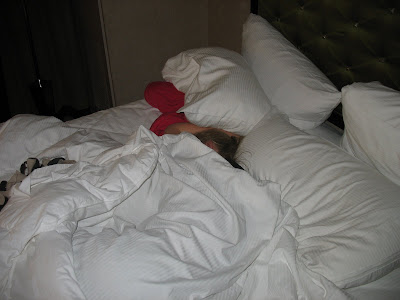 Brooke asleep while Meg and I go to ASD meetings. Oh the pain.

Meg is our class ASD rep, and I am an ASD “project coordinator” (fancy way of saying I didn’t make the Steering Committee but I can still help with things), so I accompanied her to some of the ASD sessions, just out of curiosity. It reminded me a lot of Conclave, actually. There was a session on fieldwork at Conclave that I had complained was common sense, and Meg ended up saying the same thing about the session on fieldwork for ASD reps. Overall it was a great group of students with enthusiasm and passion, and sessions ran smoothly.

We had a pretty neat session on AOTPAC (American Occupational Therapy Political Action Committee), run by Amy Lamb and Paul Fontana, who discussed the sobering reality of being in a health care field that has such a wide scope of practice. They discussed the importance of not letting other professions, a la athletic trainers, physical therapists, recreational therapists, and other similar fields, nibble away at our domain. Part of the purpose of AOTPAC is to prevent this nibblage, fighting for the rights of occupational therapists. They encouraged donations and with some nudging as well as some help from some generous students, the reps ended up with 100% participation – pretty impressive. They are trying to raise 300,000 dollars for their 30th anniversary, and the ASD reps pledged/donated about $7,000. Pretty impressive for a bunch of students.

Paul Fontana made some interesting comments and I thought he did a good job of engaging the students, although there were a few things he said that I disagreed with. He discussed how he used to pay for all his therapists to have AOTA membership, and then stopped, because it was the therapists own professional obligation to have membership. He said it wasn’t about the money. But then if it wasn’t about the money, I sure hope he donated the money he saved from not paying for their memberships, to AOTA anyway!

Another session involved some “Centennial Vision tracking”, led by two USC OT students under the guidance of AOTA Vice President Florence Clark. They showed some projects that were along the line of the Centennial Vision. I wanted to be like the donkey in Shrek and hop around shrieking MY BLOG! MY BLOG!! IT SCREAMS CENTENNIAL VISION! COME ON! but you will be happy to know, I didn’t pull a donkey.

The best session by far was the address by Penny Moyers (good ol’ P.Mo), AOTA President. She is amazingly warm and she is a wonderful public speaker. I really enjoyed listening to her speak. She had a very creative speech centered around the golden ratio/Fibonacci sequences. She even showed how the cauliflower follows the rules of the golden ratio. But do you want to hear something really embarrassing? I have an exceptionally bad memory, and so now, I totally can’t remember how she tied in the golden ratio to the Centennial Vision. Wow. I suck. Ok let’s move on now.

The conference took place at the convention center in Long Beach, near the Queen Mary. It was about six blocks from the hotel we were staying at, the Hilton. The weather was perfect the entire time, although a little chilly for those who didn’t realize that it gets colder at night (you always need to have a sweater nearby for coastal California!). Meg, Brooke, and I shared a room with two beds, and as a bunch of girls, we messed it up pretty quickly!

The convention center is light and airy and beautiful, and it was neat to walk around knowing that everyone surrounding you knew exactly what occupational therapy was! I was surprised at the diversity of people there – I would have guessed it would be a bunch of 40 year old white females. Yet there were males, blacks, whites, asians, hispanics, heights, shapes, students, clinicians, professors, walkers, wheelchairs, canes, youngs, olds…lots of variety. And it seemed most were pragmatic in their choice of outfit and shoes. You don’t go into OT if you want to wear high heels and mini skirts. There were a lot of people sitting on the floor, not just younger students, which always makes me happy to see, for some weird reason. Everyone had on blue bands around their necks holding their nametags, and many of these tags had a rainbow of colors underneath them, announcing their position or memberships. The ones with the longest tags were like royalty I guess!!

Ok….um….I want to talk about Expo, Senior Member Salon, Presidential Address, Keynote Speaker, Marc Freedman and the You are the Future communication proposals (hi marc I need to email you!), and all the neat people that were there….and it’s all in a list to remind me…..but it’s almost 2am and I need to stop. More tomorrow night. Gee I’m only two weeks late with all my posts on Conference…