How to Not be a Crappy OT (Learned the Hard Way), Lesson #1

Edit: I’ve posted this several times, then unposted it. It makes me feel so weird to share one of my most shameful moments, even though I realize that this may not seem like a big deal for some people. 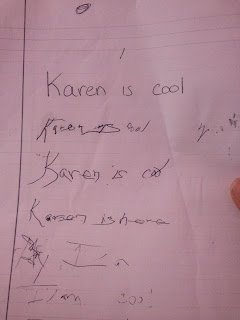 I can hardly share this without cringing. Every day this week I’ve passed the evidence with a wince and thought to myself, “do I really want to do this?” I decided that yes, I do. An important part of “learning publicly” is transparency, and that includes, at times, embarrassment.

This incident happened in my first week as a “real” OT, in Fall of 2009, meaning my first week as a registered/licensed therapist, working in Georgia. I share this with you as a precaution of what NOT TO DO! as an occupational therapist.
*Names have been changed to protect the innocent (him) but not the guilty (me).
He was a man who had had a a stroke (my notes say L CVA meaning left cerebrovascular accident). I’ll call him Bob*. We were working on him writing,  for the first time since the stroke. We were using a built-up pen. Now, before I tell you what I had him write, let me explain one thing in my defense: He was an easy-going guy, we had a good rapport, and he had a great sense of humor. We were both excited to have him write.
For his first sentence that he practiced, which was illegible by the way, I had him copy: “Karen is cool”.  I was kidding around with him. I didn’t really think about it.
I then had him write “Karen is here” then “I’m cool” then his signature.
On the next page, after he had some practice and we had done some adjusting and his handwriting was becoming legible, I told him to write whatever he wanted, as I had run out of ideas.
He thoughtfully paused for a second, then wrote, “*John and *Jane are my babies”
That sentence, my friends, is when I first realized the error I had made. As occupational therapists, we pride ourselves on working with people on the activities that bring meaning to their lives. Here I was, a brand new OT, fresh with theory and foundation and insight, and I had made such a basic error. I was so pleased with myself – so pleased that I had helped a patient who had a stroke learn to write again – that I had taken away something meaningful from him – his first written sentences after his stroke – and replaced them with something meaningful to ME. I had assumed he had no story of his own. I had made his first written words be “Karen is cool” (sure, funny to me at the moment) instead of allowing his preference, “John and Jane are my babies”.
I gave him a copy of the second piece of paper, which started with the sentence about his children, to show his kids how his first real sentence (his first legible one) was about his kids, and I saved a copy of the first page, to remind myself to never make that kind of mistake again. That it was always about the meaning for THEM first, not me.
I cringe writing this. I know ultimately it’s not the biggest deal in the world and bigger mistakes have been made, but I felt sick to my stomach as I watched him write the sentence about his babies and realized what I had done. We can be pleased with ourselves as OTs for helping a patient/client/consumer reach a milestone, but we need to make sure we let them attach the meaning to it themselves, and not steal it away with our own delight.

My one and ONLY reason for sharing such a shameful moment? To hope you as a new or future practitioner will never make the same mistake. That when your client is about to do something, or write something, that you make sure it’s with their best interest in mind, not yours. That you let them script their own story and don’t put words into their mouth, no matter how silly you think you’re being, if they have their own words you’re replacing.

I know I shouldn’t let things like this haunt me, but they do. Because I want to be a good OT, and that means not making mistakes like this – or at least learning from them.