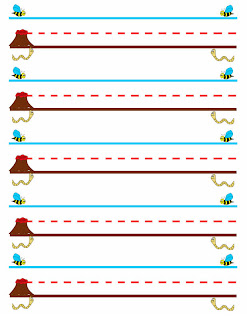 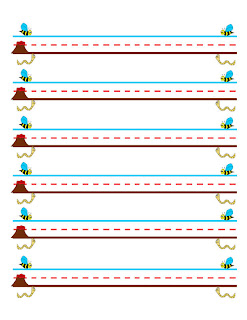 See attached. You should be able to print these out as full pages. It needs to be in color. The amazing Tonya Cooley of TherapyFunZone.com fame created these for me based on the game I explained on this blog previously. I have been using a version of this all fall and without fail, all my little guys have improved their handwriting….can't say for sure there is a correlation but I like to think so. 😉

1. Bumblebees live above the sky and if you write something that goes above the sky (NOTHING ever should be up there), bees attack it.

2. Lava is that middle red line. Baby letters should never go above it (ie a, e, o, r, etc). “Tall letters” such as h, k, l as well as capital letters have lava proof suits so they can go above the lava. If a baby letter goes above the lava and shouldn't, it BURNS!

4. You can save yourself. Either by not making a mistake in the first place, OR by “saving” your letter by immediately erasing the mistake with “medicine”, aka the eraser. “Oh noo! The bees attacked! Quick, save your letter with your medicine!) If they save all their letters on a particular line, they become a doctor. “You saved all your letters! Good job, Doctor ___!” Depending on how well the child is doing, they can be a doctor at every letter, or every word, or line, or page, etc. I reward them for being a doctor with various tiny rewards. This week I used candy (cough) although I normally don't.

5. Another option if you want to work more on letter formation etc rather than erasing: “Zombie” letters instead of Doctor. They cross out the mistake letter and re-do it, the “zombie” letter. Or if you want to focus on erasing: You could deliberately make mini mistakes and then have them be the doctor that saves them (so the focus is on erasing rather than writing….a lot of my kids struggle with erasing!). I have to say that when I make a mistake, my kids ZERO in on it to point out what just got attacked/burned, lol….they notice tiny tiny mistakes.

6. PS: When using sentences, I tell them that if they forget the “guard bug” at the end of the sentence, the worms (or zombie, or something else scary) will eat up their entire sentence!!!

Sounds complicated but kids who are ready to work on sizing typically get it right away. I first introduce lava, then worms, then bees….either within one session or several depending on level. Typically we start working on sizing/line orientation around the middle of kindergarten/end of kindergarten. When I first start doing it with them, if they make a mistake, I quickly draw a worm or bee or “lava” around the mistake to show them what happened.

By the way, today a kid of mine was working and every time he made a “p”, he would quickly make a tiny pizza (circle with dots) for the worms to eat. I thought that was funny. I could see doing a whole bunch of similar things…

The way we decide what words to write is based on each kid and their preference. I was using my corkboard/pushpin game a lot, but retired it for a while and will re-introduce in January. For some kids we play CandyLand and for each turn we write down the color they land on. If the color repeats, they can choose any word off the board to write such as licorice. For other kids I have them randomly pick a card from my I Spy card game and whatever the item is, we write. For other kids we pick a theme for each line and they can generate their own ideas. Etc etc.

Well I have so many other games/thoughts to share but this is getting quite long. I hope it doesn't seem too complicated….it's quite simple I swear!  Just wanted to elaborate on some ideas. I hope to post a video really soon of me working with a few kids on it ( a friend's kids, not my OT kids, for privacy purposes of course).