My grandmother is a flamingo: A mini geriatric occupational profile 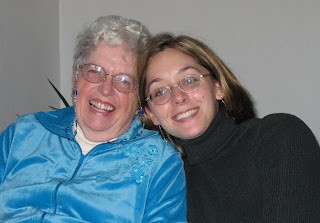 My paternal grandmother and I have always been very close. My grandfather died last year in August, and she has had a rough time adjusting to living alone and being without him, after over 50 years of marriage. She ended up going to Norway with me a few months after he died, and we spent several wonderful weeks there visiting my old host family/friends. During our trip I had a critical-OT-eye, watching how she appeared physically and mentally. She had pretty typical geriatric issues, such as trouble fumbling with pill caps due to her knobby arthritic fingers. She’s had knee-replacements so stairs are hard for her. She forgets thing a lot. I brainstormed furiously during my trip for ways to help her deal with these things. Some things I could help her with, other things I couldn’t – I hadn’t even started OT school then so I was only operating from a concerned granddaughter/OT-observation-only kind of standpoint. While I doubt I would work in geriatrics long-term, I look forward to our third, geriatrics-heavy semester because it means things I can help her with. (My maternal grandfather is still alive and so I don’t mean to ignore him in this post but he doesn’t have any visible issues!)

Grandma is lucky to have 7 children, several of whom live nearby, and 25 grandchildren, so she definitely gets help. She still drives and takes some senior exercises at the YMCA, including a “drum” class where they beat on balls. She really likes that class. She has two issues we’ve discussed lately that bother her – one unresolved, one getting resolved.

The first is that she gets a HUGE amount of snail-mail daily. The three weeks of mail I had waiting for me when I got back last week were the equivalent of one day for her. It covers her dining room table in a huge mountain and takes her a good part of the day to go through it, if she even manages to get it done. Most of it is from charities. She tends to send $10 checks to every charity that asks, so that adds up to a LOT of junk-mail (not to mention her CPA wants to tear his hair out, but that’s another story.) Anyway, dealing with this mail is a huge burden for her. She knows, realistically, that if she stopped sending checks to all the different charities, it would help, but she just can’t help herself. She opens those mails with those poor starving orphans and just feels driven. We’ve all told her not to but she still struggles. It’s been an ongoing issue for a long time.

Today, she called me and we talked for a while. She was having a rough week, loneliness-wise. She mentioned her mail again and we discussed the charity issue again. She talked about how she just wanted to help them all, and how one of her friends told her to just do a Hail Mary as she put the charity requests in the trash (she’s very religious) . I suggested that she make a charity corner each day (since she might literally get about 20+ requests a day for money), not open any of the envelopes at all so she can’t be broken, and then do her rosary that day for all the different charities…and then throw the requests away or shred them, unopened. She actually seemed to like the idea that A) she could just not open them, and B) her guilt could be somewhat assuaged with a rosary. I also told her I’d check online to see different ways I could get her off mailing lists.

One of her other issues involves balance. She’s sometimes unsteady and could definitely use some balance work. She’s been going to her senior exercise classes which help a lot. She also has been putting one hand on a chair and then standing on one foot (hence the title of this post) for a little while. I had suggested it to her months ago (I did warn her to start out with someone nearby in case it was harder than she expected). She was telling me she thinks it’s really been helping her balance. I was happy to hear that although I think it’s probably mostly from her exercise classes. Regardless, she has become more steady, and that has been confirmed by several of her children.

I guess this ended up becoming a mini-geriatric occupational profile. I really just wanted to talk about how I want to try and use my budding OT knowledge to help my grandma out, and I guess I got out of control!

The picture above is of us in Norway this past October. The picture below I took at one of their famous parks in Oslo.