NOT A COOL DAY AT ALL 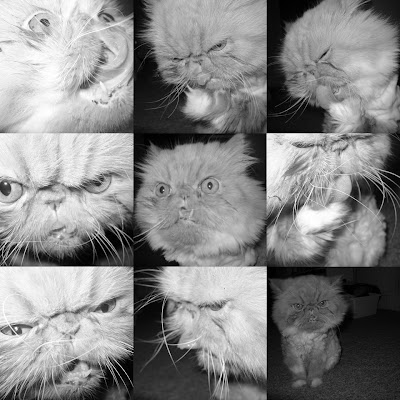 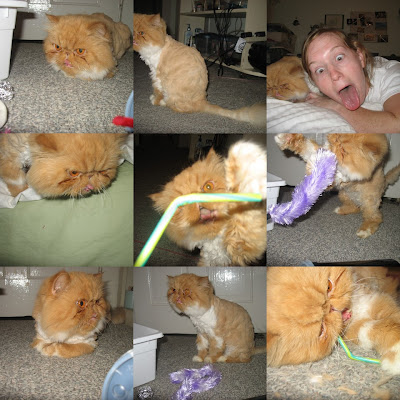 Me: Knock knock
9 year old with PDD-NOS (ie, severe developmental delay): Who’s there?
Me: The Interrupting Cow
Him: I HATE cows!

Today sucked a lot, most specifically at the end of the day, and then more specifically, when being told my upcoming fieldwork fell through….

Today was spent in normal clinic…from 830am to 720pm. Saw a little boy at 9am that shivered violently, had to turn down air/find him an adult shirt…saw a cute little girl that told me she had a baby in her stomach. I asked her where it came from and she said, in a duh voice, “from my stomach”. LOL. We worked on step-by-step drawings of Gary the Snail…the kids LOVE my giant blow-up Gary (a very old present).

Paperwork, paperwork. Did a home visit with kid whose mom was distraught about vaccination excemption paperwork being rejected…is big on specific diets/supplements for all her autistic spectrum kids.

Came back. Saw young girl and did Care-Bear puzzle with her…edge pieces in one box, wibble-wobbles in the other…kids always know immediately what I mean when I say wibble-wobbles…lol. Unfortunately the puzzle was hard for me, I have bad issues with puzzles! Good thing she was good at it! We also worked on drawing inferences with speech cards…like I showed her a card and she guessed it was a worm…really it was a mouse tail..you could see a mouse hole and cheese. And worked on “absurdities”…like the cow that says meow, the girl who eats her soup with a shovel, etc. the speech people have lots of great decks of cards that I like to borrow for OT.

Then it became craziness time as school lets out…we had me, OT, and COTA working, but had four kids or more at times…all trying to juggle them…some kids coming 40 minutes late, other kids not coming, other kids having speech co-treats, etc…played a lot of Candyland today and did some great work on attention span, turn-taking, winner/loser, social skills, calmness, etc.

A LOT of stress with scheduling/paperwork…I keep meaning to do some of it at home, but I already work over-time as it is…frankly by the time I get home I’m so stressed out and exhausted, that I just can’t fathom doing it.

One issue we are having is with mileage reimbursement/fairness…they reimburse at 30 cents, which is about 50% of what IRS counts for reimbursement…yet they get reimbursed for mileage by the early intervention program at a higher rate…so technically profiting off mileage of therapist cars…they say because they pay for drive-time that it’s okay…well that may be true, but guess what, I’m not paid…so it seems fair I should be reimbursed closer to what they get reimbursed so they aren’t profiting off my car (which has had over $600 in repairs since starting there), since I’m free labor. Ugh.

ANYWAY…I got off at 720pm stressed out after hours of nonstop chaos, and then I have two messages on my cell from the fieldwork coordinator telling me to call her…which I know means bad news. She informed me my upcoming fieldwork – the one starting September 29th – has fallen through as the contract was just received, wasn’t a UT one, and has to go through litigation, so is months away from finalized. She made it clear the problem was on the side of the hospital, not my program’s……although I don’t understand the minutia of why, even though they’ve been working on this contract for at least 4 months, that this has happened. So I’m not pointing fingers or playing a blame game…writing out this rant is not to fuss at anybody…but to say I’m really frustrated that all three of my fieldworks have fallen through, regardless of whose fault it is.

I cried a little – called classmate Allison to see if we were meeting up to walk and to give her the news – a few minutes later as I walked in the door, Kerri called to ask if she could bring me cookies…she brought over several types of bakeable cookies, some vanilla soymilk and her cat…we made a few of all 3 types….Oxford her cat was petrified of Lester (he was all like socially awkward excessively friendly kitty, hey what up, and she was like What the Hell Get Away From Me You Freak)…so she and I sat in the doorway between the living room and bedroom and ate cookies and milk and hung out,keeping Lester from trying to give her unwanted attention. She LOVED his haircut. 🙂 She hung out until a little before 10pmish, I really appreciated her distraction and of course cookies. Very nice. I sent her home with a big bunch of carrots, some gypsy peppers, a blue vase she liked that I never use, and the rest of the unbaked cookies, so I guess we both got something out of it, LOL.

Okay back to ranting about fieldwork….

This first one has been a good experience, but very excessively stressful with long hours, and I was looking forward to this next one being much more straight forward…not as much chaos, not as many hours, etc…plus I kind of knew the upcoming supervisor and liked her, had already established contact with her, already knew my schedule and it was glorious, etc. Ugh.

Then, because things fell through a month before starting, with the contract for rotation 1 (due to somehow it not being realized the contract had expired), it became:
1. Current pediatric site I’ve been at.
2. Specific Rehab Hospital Moved Up, San Diego (my hometown) down the drain
3. Psychosocial, VA

Then, the third one fell through (for legitimate reasons – my future supervisor’s legs were amputated!!), and it became
1. Current ped site
2. Specific Rehab Hospital
3. Somewhere, who knows where, but probably in Nashville at this point – psychosocials are hard to place.

The fieldwork coordinator gave me a few options over the phone…and included Little rock AR and a few other far away places…which I know she is just trying to be thorough…but I almost choked. I was like…I’m about to be sent off for my last one for 3 months…this next one is in a few weeks…I can’t just get up and move away for six months, to two different places, money-wise, time-wise, stress-wise, life-wise, etc…really stressed me out. 3 months is bad enough, but to make it six, with just a few weeks notice, NOT OKAY!!!!!! AUGH!!!!!!!! NOT COOL!!!!!!!!!!!

Good news is…tomorrow, if our schedule stays the way it currently is, tomorrow won’t be too horrible of a day…hopefully to make up for the hideous Monday/Tuesday.