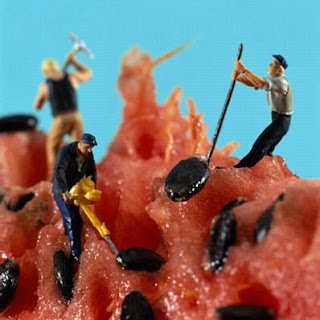 This was copy/pasted to the Tennessee Occupational Therapy Association (TOTA) listserv, and I am again copy/pasting it, since it is a great example of OT. This article is from the New York Times and there are links to it are at the bottom, since full articles are accessible online.

In the Trenches the Occupational Therapist
Coaching the Comeback

WEST ORANGE, N.J. – In the therapy gym for the minimally functional, Jodi
Levin props a patient between cushions, kneels behind him and then braces
him with her arms. She directs his mother to select photos of his brother
and his father. At the coaxing of Ms. Levin, an occupational therapist on
the brain injury unit of Kessler Institute for Rehabilitation, the mother
holds one photo to the left side of the patient's head, the other to the
right.

The patient, wobbly and glazed, tries mightily to understand her command and
then heed it by compelling his neck to turn. He almost makes it.

Gently letting him go, catching him as he flops, Ms. Levin explains to his
mother, “Now I'm working on trunk control.” The man flinches. “It's the
basis of everything,” she continues. “For getting in and out of bed,
brushing teeth, getting dressed.”

Eight weeks earlier, the patient, 18, wearing a helmet and protective
leather gear, had been riding his motorcycle to community college. As he
came over a hill, the car in front slowed abruptly; to avoid hitting it, the
teenager swerved and was hit by an oncoming car.

Remarkably, his body survived relatively unscathed. But he suffered a severe
traumatic brain injury. He cannot yet swallow food, control his bowels or
regulate his body temperature. His brain cannot yet send messages to his
limbs. He cannot speak.

When he arrived here, his eyes were open but unseeing. He has already come a
long way.

His care is overseen by neurologists and physical medicine doctors. But it
is the job of Ms. Levin, his occupational therapist, to plan exercises that
will help him develop or adapt skills to live as safely and independently as
possible. She also educates and supports family members as they adjust to
their loved one's new normal.

Now Ms. Levin puts her grimacing patient, who wears nerve stimulators 12
hours a day, onto a therapeutic exercise bike. The machine moves the pedals,
but as he initiates more movement, it will calibrate. She straps him in,
jesting, “I can't wait for you to yell at me and tell me this stinks.”

The boy's mother watches Ms. Levin tearfully. “Some people talk around my
son as if he's not there,” the mother says. “But Jodi talks right to him.”

Ms. Levin, 28, has worked on the brain injury unit here for six years.
Daily, she confronts the fallout from behavior that has been reckless or
cruel, with injuries caused by drug overdoses, drunken drivers and drive-by
shootings. Many of her patients have had strokes or brain tumors. She has
also treated Iraq war veterans, who are now trickling into nonmilitary
facilities like Kessler largely because of the persistence of their
relatives.

Her treatment plans adjust to the serendipity or horror of a split second: a
hit during a football game, a slip on an icy patch, a veering car. Annually
in America, there are 1.5 million traumatic brain injuries, a category that
includes external blows to the head but excludes damage caused by illness.

The extent of destruction to a brain, the possibility of recovery for each
patient, hinges on so much – and so little. Ms. Levin's definition of
optimism for one patient may be regaining the ability to drive. For another,
it may be the ability to blink in assent.

When patients sustain frontal lobe injuries, their personalities can be
affected. They may unexpectedly become agitated or angry and have difficulty
filtering inappropriate language. On occasion Ms. Levin's hair has been
pulled. She has been kicked, groped and bitten. “The families are so
embarrassed,” she says. “I keep explaining that it's the brain injury, not
the patient.”

Yet even in her brief career, there have been advances in occupational
therapy, which can address many mental and physical disabilities. Ms. Levin,
who has a master's degree in the field, has been adding computer-generated
programming to her capacious toolbox, which includes blocks, flash cards and
cutlery adapted for stroke victims. The prognosis for many patients is
improving.

At the same time, though, insurance companies are demanding more frequent
updates, with proof of functional rather than cognitive progress. Otherwise,
requests for further therapy may be rejected.

In reality, Ms. Levin says, cognitive ability often precedes functional
progress. “A young brain won't plateau at month two or three,” she says in
frustration, during lunch break. “Recovery from a brain injury is not like
the flu. It takes a long, long time.”

On this early day in the new year, Ms. Levin has seven patients. Three are
18-year-old men. The winter holidays often bring a surge of adolescent
patients and their victims to acute rehabilitation centers. Elsewhere in the
unit's two gyms, therapists work with patients who were passengers in car
accidents. Another influx of this kind of patient tends to arrive shortly
after spring break.

Her second teenage patient, a bright high school athlete, went to a party at
which prescription and illegal drugs were swapped. He was the only youth
there whose body reacted starkly. He went into cardiac arrest and his brain
lost oxygen, before doctors were able to revive him.

During his session this day, Ms. Levin places her face close to his, and
makes simple, cheery conversation, trying to hold his gaze. “Hi!” she says.
He stares back, eyes widening, eyebrows raised in concentration and effort.
His jaw lowers. “Hi,” he mouths silently.

“That's a breakthrough!” she says joyfully.

Ms. Levin sets weekly achievable goals for her patients. “I invite families
to watch my sessions,” she says, “so when they visit, they don't say, 'Is
that all he can do?' I want them to see how hard the patient is working to
achieve holding up his head.”

She sees her third 18-year-old in an adjoining gym for more functional
patients. The boy is healing from an operation in which doctors temporarily
removed a section of his skull to accommodate brain swelling. His jaw is
wired shut. He has visual and cognitive impairment.

In early December, he drove after having a couple of drinks, crashed, flew
through his windshield and hit his head.

But last week, after interviewing his family about his activities, Ms. Levin
had him playing tennis with a balloon. A few days ago, he halted his
wheelchair before a vending machine, correctly counted his coins and got a
soda. On this day, holding a trained therapy dog by a leash, he walks
haltingly across the gym. She hands him a word-search exercise: he picks out
three-letter words. By the end of the mont
h, Ms. Levin expects him to go
home and to start outpatient therapy.

As for her feelings about his own role in his injury, Ms. Levin says,
“Everyone deserves a second chance to redeem themselves.” Nonetheless, she
adds, she would like to show videotapes of her patients to high school
students.

One patient in particular haunts her. He was a 21-year-old drunken driver
who survived a terrible accident. After many months, he left Kessler in good
shape, mentally and physically. Ms. Levin happened to work a rotation in an
outpatient clinic and continued treating him.

“He'd come in and boast, 'Hey Jodi, I was out drinking last night, blah,
blah, blah,' ” she recalls. “He was my biggest failure.”

She glances around the gym, at therapists and doctors working with patients
in various states of alertness. A father tenderly kisses a young woman on
the forehead as she stares vacantly. An elderly woman tries to sort plastic
knives from forks.

“I had a young boy, about 20, who had been in a car accident,” Ms. Levin
says. He had been driving at night, was blinded by headlights and, in the
ensuing crash, was ejected.

He was in a coma. He had brain surgery, plus broken legs and wrists. Ms.
Levin treated him for three months. He left Kessler with a walker. During
her outpatient rotation, she continued working with him.

“He still has memory deficits,” she says. “He repeats himself. But he covers
it well. He can drive now, and he has a job stocking shelves.”

The accident was three years ago. He talks of going back to college, perhaps
to study occupational therapy. “He called recently and said, 'Can you help
me find an O.T. school that will accept me?' “

She smiles tremulously. “When you have one good patient like that,” she
says, “he sticks in your head. He gives me my drive. I think, 'It can
happen.' “

Also find photos and a link to email the author with the article online
here: http://tinyurl.com/3cy7dv or