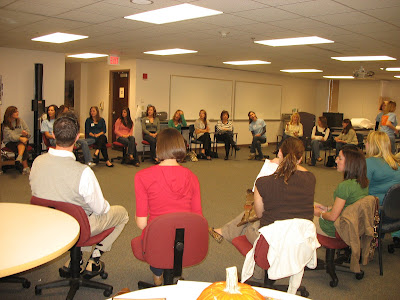 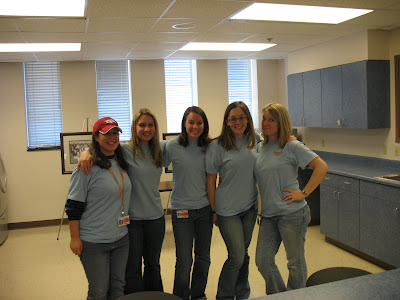 The blue girls – we all wore our OT shirts! All the students were there, but we didn’t take a lot of pictures – during cleanup we managed to get this shot. It’s Mary, Minda, Emily, me, Chrissy. 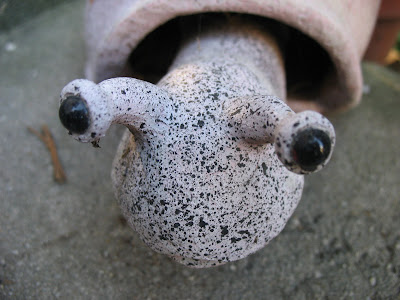 This is totally a random picture but it’s a snail on my step. I had to include it.

It didn’t start out so well for Emily and I, who got there first. I had a heavy pumpkin in my hands (the OT pumpkin). It turns out our badges don’t work on weekends. Anywhere. And the UT campus is locked and secure. We started at one area. Tried another. Moved around. Tried another. Was told an officer would meet us. Officer wasn’t there. Tried previous area. Called back. Said officer was now there. Etc. We were also dodging asphalt-layering people. It took us 20 minutes to get inside, and then we had to get someone to let us into their area, and then we had to make sure all students came through a certain door, so we posted sentries…it was a mess!

Anyway, it all ended up working out great. Every single new Memphis student, except maybe one, showed up. We played icebreakers, watched the slideshows (one of which is below), interacted with each other, ate pizza, and did tours of the campus. All the new students looked so shy and scared, it was so adorable – we were there less than a year ago!!

It was a good day! OT Student Emily was our coordinator of this event and she really did an awesome job. It was high energy, fun, well-run…the few security blips early in the morning were due to bureaucratic confusion, and overall, it just went very smoothly.