Pumpkin muffins and Spanish. There is no relation. 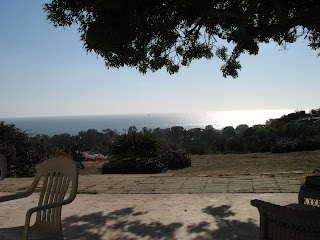 This was my first full day back in San Diego.

Mom and I hit Costco for a ton of stuff, which included fresh berries. We also spent over an hour in our backyard with the cats, since it was a beautiful warm and sunny day. We could see white sailboats way far away in the ocean. It was very peaceful. We also went to a Gem fair, where she spent hundreds of dollars while I followed her around reading a book. I'm talented that way.

Tonight we made chocolate pumpkin muffins with peanut butter chips. It was yum. Except, this is the grossest thing in the world – a fly apparently got on a muffin without us knowing AND IT GOT BAKED!!!!!!!!!!!!! A FLY WAS BAKED ON TOP OF A MUFFIN!! I AM BARFING INSIDE MY MOUTH RIGHT NOW!!!!!!!!

I've been in the Eastern, Central, and Pacific time zones in the last week (thanks Scott), so I guess it's understandable that I'm really tired!

This morning I watched my mom interact with Lupita, the lady who cleans the house and only speaks Spanish, and then also use ASL with her roommate, Andy, who has Usher's syndrome and is therefore deaf with very low vision. I am envious of my mom's ability to speak English, Spanish, French, and ASL. I only know English, Norwegian, and a few words of Spanish and ASL. Unfortunately there isn't a lot of need for Norwegian in the U.S, haha.

I'm thinking about the possibility of spending some time in a Spanish immersion program after I graduate. I have heard bilingual OTs are in high demand. I have had Spanish most of my life, but I always forget it – immersion is the only way that works for me. I had one year of Norwegian when I was 15 via immersion in Norway, and I am still more or less fluent. Yet I've had Spanish probably 14 years of my life, and only remember a few words!! That isn't cool.

All I know is…I think it would be good for me to speak Spanish relatively fluently, as a U.S. occupational therapist.

Holiday Disclaimer: My MOT student journey includes breaks, so I'm in San Diego for the next few weeks. Not all posts will have to do with OT!