I’d now like to introduce you to my very own invention, CHAKRA BEAR!!!!!!!!
This bear is named “Choku Rei” as her belly’s power denotes the first Reiki symbol and represents energy with a purpose. (Note to self: Next time I complain about not having enough time, remind self about Photoshopping Carebears at 2am.) 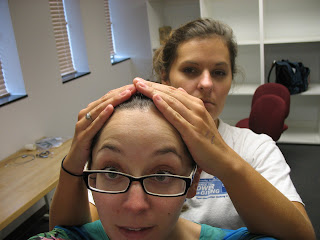 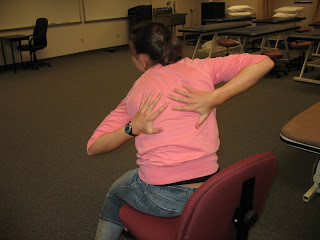 (Emily healing something in her back!)

According to www.reiki.org, “Reiki is a Japanese technique for stress reduction and relaxation that also promotes healing. It is administered by “laying on hands” and is based on the idea that an unseen “life force energy” flows through us and is what causes us to be alive. If one’s “life force energy” is low, then we are more likely to get sick or feel stress, and if it is high, we are more capable of being happy and healthy.”

We recently had an hour lecture on Reiki by a fellow OT student, Cheryl. Our professor is having us give presentations on various techniques and he is interested in making sure we have exposure to many different techniques, even ones that most Americans greet with skepticism. I personally think it’s pretty cool!

A really simplified explanation of how this works is that you can hold your hands in various positions over the main chakras for self-healing, although you could do it to others using a very gentle touch. You might do this for about 5 minutes until you start to feel some tingling or other sensation that tells you you are ready to move on. Virginia commented this was probably just a sign your hands had fallen asleep.

While I made some jokes about Reiki, I do think it has potential and that it is important as occupational therapy students to be aware of the many different ways one might approach treatment, and that we shouldn’t automatically discount more Eastern-based treatments! I really do like the idea!