The Lava Paper is in!! 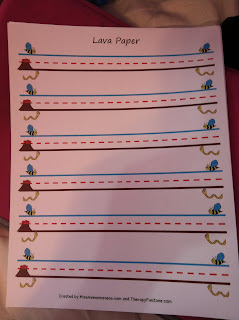 Our lava paper came in! I invented lava/worm/bee paper about a year ago?? and then Tonya of TherapyFunZone used photoshop to make it real, rather than my lame-o version of just drawing it onto kids paper. I typically just print out like 20 sheets at a time at home on my color printer because I do use it on a daily basis, but that is obviously quite expensive. So I used a Groupon I got through Vistaprint to get 1500 copies for I forget how much but under a $100 which is wayyyyyyy cheaper than what I was doing. Plus it’s a nicer quality paper. I use it sparingly, mostly for kids just learning the rules, and/or just cut out strips at a time instead of a whole sheet, and/or sometimes just still draw small amounts on a kid’s paper rather than use this, but since I do use it so often it’s very nice to have it.

For any new readers – I have links to this paper somewhere, lol, try checking out pinterest.com/funkist/ot-ideas and TherapyFunZone.com has it too (which reminds me I need to print out the stuff I bought from her site). But what it is is the rules of handwriting turned into drama. If you go above the sky, bees get your letters. Go too low and the worms get your letters. The lava burns your letters if they go higher than they should, only tall letters can get through the lava. Luckily, YOU are an eraser SUPERHERO so you can use your eraser powers to save the letters!

Makes it easy to cue, too once the kid is familiar. IE if a kid is going too high I can be like “Bees!” or too low “Worms!” or “Lavaaaa!! Owwww!” rather than having to be like “Gosh, Bob, I notice that your H is going a little too high over the top line.”

Lately I’ve been saying that the worms love to eat the tails of the tail letters (y, p, g, j, aka descending letters) and that anything else is poison to them. I have a rubber worm I keep in my storage clipboard and at the end of a sentence or two the worm comes to inspect to see what there is to eat. Hopefully only tails and no poison. Then the worm can do a stretchy happy dance!

One kid doesn’t care so much for the lava mid-line but LOVES the idea of roller coaster ride heights. (You know how you can only go on a rollercoaster if you are tall enough..)

I read somewhere recently that you can use the non-dominant hand to show how the 3, 5, etc wrap around the finger (to help with reversals). I liked that idea, but I would want to make it more…anthropomorphic so to speak. Something along the lines of keeping the fingernail safe so you need to make sure it always has cover ….