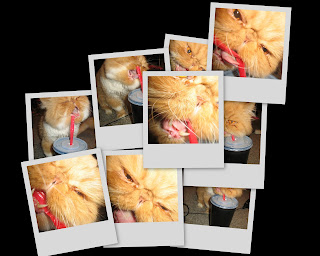 So….I left my house at 8am with less than 5 hours sleep, worked steadily from 830am until 745pm (with a lunch break though), and got home a little bit after 8pm….a looong day…

but it was AWESOME in many ways (sucky in a few). Let's count the ways. Okay wow this got really long.

1. I only had one kid this morning and otherwise got to do a ton of paperwork. I was in the groove man, whipping out those plans of cares and evals and progress notes and you name it.

2. Got to eat a yummy lunch at Newk's with my OT, billing specialist, and clinic director…I had brought spinach leaves and tuna but a lobster/crab bisque and ham sandwich sounded way better, LOL. The director accidentally ate a clove of garlic!! And then she was sweating and her arm was tingly and I was like um, I happen to have a baby aspirin in my purse to ward off heart attacks, please take it, even if it's just garlic-induced heartburn, my beloved grandma has spent the weekend in the hospital with a suspected heart attack, just humor me, LOL. But seriously, why the hell do I have baby aspirin in my purse? I'm like Mary Poppins for druggies perhaps.

3. Paperwork, beautimous paperwork. These days our schedule is relatively calm until 3pm when kids get out of school, then it explodes.

4. Saw a kid I haven't seen before and his eval made him sound mildly scary (talk of hissing and such), but he actually did pretty well….we did Mr. Transformer and Mr Spiderman and SpongeBob Potatoheads…the speech therapist happens to have several and it was a co-treat for half the session. I have remembered from my LeBonheur Children rotation that cutting thicker paper (like manila folders) is a lot easier for kids with poor scissor skills because the paper doesn't bend…so I drew some lines across a manila folder.. he cut them…then glued them onto paper…then scribbled on them with red marker (ketchup)…entitled “French Fries” lol. To take home.

5. Saw a kid with tactile defensiveness/severe aversion to stuff like fingerpaint, so of course a goal is fingerpainting….he also needs some serious work on social skills…I asked my COTA to bring in her (much younger but very sweet) kid when it was time for a break so they could fingerpaint together…and he did really well both socially and with getting his palms covered to do a painting…I've been doing a lot of painting and artwork with kids lately. While his palms were covered with paint and face-down, I drew with marker around his hands so that his two palm/hand prints became kissing turkeys. When I told his mom about him doing so well socially and with fingerpainting, her eyes lit up. 🙂

6. A kid cancelled so our schedule wasn't quite as crazy…when all of us have high-maintenance kids it can get a little hectic. We had a kid with autism playing with Bubba Bear and when Bubba asked him what his favorite toy was, I swear (as would my COTA and ST) that his answer was “crack” LOL. I'm sure it wasn't, but it sure sounded like it. We were all trying not to laugh.

7. One of our sweet older kids with Down syndrome soiled his pants due to an upset stomach…poor speech therapist had to scrub the chairs and everything down…it smelled horrid…and his mom had brought him extra undies but not extra pants, so he had to leave the clinic just in underwear, poor kid! LOL.

8. One of our more interesting kids, he looks like a little Abercombie & Fitch model, has PDD-NOS (pervasive developmental delay not otherwise specified)…very unusual kid…he is like 9 years old but has very poor speech, like saying things like “nake” instead of snake, the way a 2- year old would. Well, his mom had warned us he was hyper because he had started a higher dose of Risperdal yesterday…so we did a bunch of sensory stuff in the ball bath and all that, but then when it was time to settle down and he was coloring, he said, in broken speech “I'm glad to be here with you today” and I was like….um….really…wow…thanks…why…and he said “Because I haven't seen you in a long time”…and I was like….whoah…lol. Very sweet. And then he made several other interesting comments. Like he was coloring in a snake and I was like hmm is that a snake or a caterpillar nad he was like “Snakes are scary so I want it to be a caterpillar” and then there was another caterpillar on the page and he was like “Plus now it won't be alone”. This is a kid who usually ignores the real world and only wants to talk about cars. It's amazing what medication can do to enhance a child (or destroy a child but that's another story lol). I was really impressed. It was a reminder that a lot of these kids who seem so aimless and lost are really in there…just have to find ways, whether through medicine or therapy or whatever, to reach them. Oftentimes, once sensory needs…or biochemical needs… are met, behavioral issues clear up immensely. –

9. Our last kid was supposed to end at 7pm which is when the clinic closes. His grandma didn't show up until SEVEN THIRTY. I spent that extra 30 minutes playing “grocery store” with him, he is only like six and has no concept of money/costs but he loved this fake cash register, I would buy corn and he would make it be like 39292929493 dollars, lol. He didn't like that the coins said 5 or 25 though if the bill was like 4992017 because he wanted there to be a 4 coin, a 9 coin, etc.

11. My friend Sarah CRACKED ME UP by telling me a story about a psycho friend of hers who e-mailed her this looooooooooong mean rant, and Sarah's response? TL;DR. Now I had no idea what this was, but apparently it stands for “Too long; didn't read.” This cracks me up to NOOOOOOOOO END because talk about letting the wind out of sails…lolol…what a PERFECT response. I love it. I am surprised that most of my reader's don't just comment with TL; DR lol.  In fact most people will probably respond to this with TL;DR. Now I have to admit I like to say TL DR without the semi-colon because the semi-colon requires me looking at the keyboard to find. But Sarah scolded me. Hey do people who had colon surgeries think about semi-colons?

But anyway I think from now on it doesn't matter who e-mails me what, my response will just be TL DR, it's just so perfectly snarky, and is it ironic it took me like a huge paragraph to write about the merits of not reading something?

12. My cat Lester cracked me up by chewing up my drink straw, I guess technically that's just sucky, hahaha but it amused me greatly. He is so silly.

12.5 I rested my poor chocolate popsicle against my rice. Chocolate rice is yummy, as I so serindipitously found out.

13.5 Just took about 20 close-up pictures of Lester eating on the straw. I'm OBSESSED.

14. I just feel like things are going really well right now…not to say everything is ALWAYS sunshine and lollipoppy, but overall…I'm a lot more flexible and relaxed…give me a kid, any kid, throw him on me last minute…hand me two kids…hand me random paperwork…hand me anything…I feel prepared. Now of course I say that and then tomorrow during an eval I'll be like OMG WHAT AM I DOING NOOOOOOOOOOOOOOOOOOOOOO….lol.

15. I should stop numbering now. I should go shower and go
to bed…I've spent way too long playing with Lester videos 🙁 Bad kitty mommy.