Waiting for school to start so I can try my new evil octopus teamwork game. This game consists of hiding multiple pieces of the same letter around a room (so for example, there would be like three letter “A” hiding together) (8 letters total) and the kids have to explore to find the letter. Once one finds the letter, they have to tell the others so that they can hurry to get their own same letter piece  (Hey over here! I found the A!) and then they have to all bring it to the evil octopus for one of its legs….each time, one of the evil octopus’s henchmen (a monster) guarding a leg gets thrown in the dungeon, ultimately the octopus has no henchmen left and the octopus is destroyed.

Something like that. It’s a work in progress. Ideas? 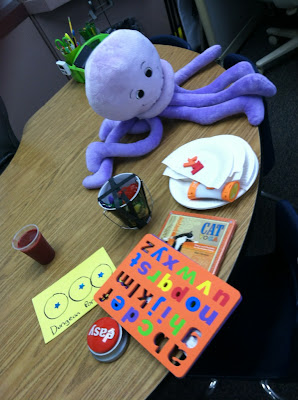 Other OT ideas from Party City and Target 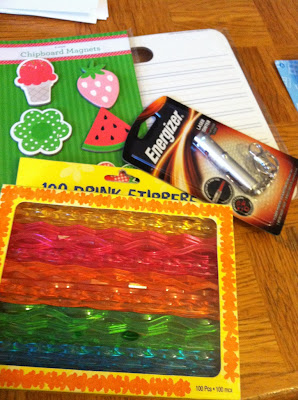 Party City stirrers (I keep wanting to write strippers?) anyway – we will likely stick these in styrofoam and put large beads down them, or sort them, or use them as make shift stencils, etc. Different patterns.  Also a laser pointer – I will be careful to not let the kids flash in eyes – but to point at things/scan/track. Also some magnets…and in the upper right corner, some dry erase board that has the middle line dotted and red, just like I like it, as a lava line! 🙂
Category: Occupational Therapy | Comments: none

I Spy In Your Clear Take out Container….BUGS and ALIENS…yay OT 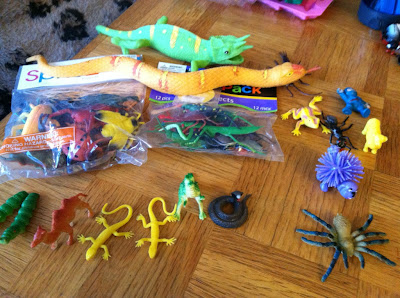 All my kids love bugs/insects. I use most of these for tong/tweezer activities, and sometimes as characters for our games, if it’s just the two of us, to make it more interesting. Went a little bug-crazy today. Hey whatever works to keep our OT kids interested 🙂