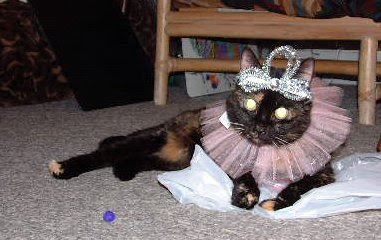 Last August I had to have my beloved cat put down and it was one of the most traumatizing experiences of my life. As the anniversary approaches, I decided to write a SOAP note in her honor. Not that it’s a very nice one, she was a mean cat to most people but she was all meow and no bite. Well, ok, a little bite. Maybe that makes this a DIRT note. Haha, I kill myself. Anyway, since we discussed SOAP notes in class today, I decided I should post this.

S: Nikki voiced her complaints of of arthritic pain in her joints
as well as stated she always has a generalized sense of anxiety.
Reports hobbies of watching ants, biting butts, sitting in windows,
and meowing.

O: Nikki was observed taking Amytriptline to calm herself. She
raced from room to room, meowing, as her owner cleaned. She jumped gingerly during window-ground transfers, and appeared agitated.
She bit the wrist of the owner’s friend and did not express remorse.

A: Nikki appears to have difficulty initiating appropriate social
interactions with other felines and humans. Sensory integration
approaches, such as a brush protocol and heating pad may help her
both with her anxiety and arthritic pain. ABA therapy could be used
to teach her to stop biting. She would also benefit from consistent
monitoring of her medications.